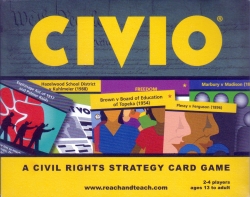 CIVIO is a strategy card game that explores the relationship of issues, freedoms, laws, and Supreme Court cases that have both strengthened and reduced civil rights and civil liberties.

Using a handful of cards representing laws, Supreme Court decisions, constitutional amendments, key issues, and freedoms, you are in a race against other players to combine these cards into precedents. The more points you earn, the higher your ranking. In time, you could become Chief Justice of the Supreme Court!

CIVIO comes with a deck of 78 cards, each beautifully and uniquely illustrated, four blank case cards for customizing the game, and instruction booklets for playing two versions of the game. The game is manufactured and assembled by a worker-owned (and union-labor) cooperative using recycled paper and soy-based ink.

CIVIO was created by the award-winning team at Reach And Teach and illustrated by bestselling author/illustrator Innosanto Nagara (A Is for Activist).

About the Creators:
Reach And Teach, founded in 2004, is dedicated to transforming the world through teachable moments with books, games, toys, curriculum, and other products that promote a more peaceful, sustainable, and inclusive world. The company has won multiple awards for its work, including the Moonbeam Children’s Book Award, the David Sindt Leadership Award, the Local Heroes Award, and the Sustainable San Mateo Award. Reach And Teach opened its first brick-and-mortar shop in San Mateo in 2010 and has been online for over a decade in what has been called a one-stop shop for world peace.

Innosanto Nagara is the cofounder of the Design Action Collective, a worker-owned cooperative design studio in Oakland, California, that is dedicated to “serving the Movement.” He is the author and illustrator of the bestselling children’s book A is for Activist.