Colorblind: The Rise of Post-Racial Politics and the Retreat from Racial Equity 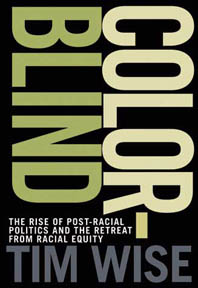 Tim
Wise
Scheduling Info Upcoming Events
Tim
Wise
Following the civil rights movement, race relations in the United States entered a new era. Legal gains were interpreted by some as ensuring equal treatment for all and that "colorblind" policies and programs would be the best way forward. Since then, many voices have called for an end to affirmative action and other color-conscious policies and programs, and even for a retreat from public discussion of racism itself.


Bolstered by the election of Barack Obama, proponents of colorblindness argued that the obstacles faced by Blacks and people of color in the United States could no longer be attributed to racism but instead result from economic forces. Thus, they contend, programs meant to uplift working-class and poor people are the best means for overcoming any racial inequalities that might still persist. In Colorblind, Tim Wise refutes these assertions and advocates that the best way forward is to become more, not less, conscious of race and its impact on equal opportunity.

Focusing on disparities in employment, housing, education and healthcare, Wise argues that racism is indeed still an acute problem in the United States today, and that colorblind policies actually worsen the problem of racial injustice.

Colorblind presents a timely and provocative look at contemporary racism and offers fresh ideas on what can be done to achieve true social justice and economic equality.