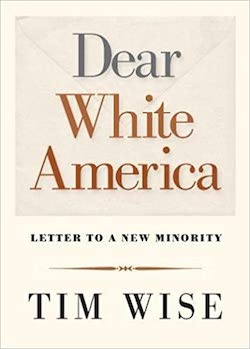 White Americans have long been comfortable in the assumption that they are the cultural norm. Now that notion is being challenged, as white people wrestle with what it means to be part of a fast-changing, truly multicultural nation. Facing chronic economic insecurity, a popular culture that reflects the nation's diverse cultural reality, a future in which they will no longer constitute the majority of the population, whites are growing anxious.

That anxiety  helped to create the Tea Party movement, with its call to "take our country back." It fuels Trump and his supporters who want to "make America great again." By means of a racialized nostalgia for a mythological past, the Right is enlisting fearful whites into its campaign for reactionary social and economic policies and actions.

In urgent response, Tim Wise  penned this pointed and provocative work. Employing the form of direct personal address, he points a finger at whites' race-based self-delusion, explaining how such an agenda will only do harm to the nation's people, including most whites. In no uncertain terms, he argues that the hope for survival of American democracy lies in the embrace of our multicultural past, present and future.

"Tim Wise has written another blockbuster! His new book, Dear White America: Letter to a New Minority, is a cogent analysis of the problems of race and inequality as well as a plea for those who harbor views about race and racism to modify and indeed eliminate them. While the book's title addresses white people, this is really a book for anyone who is concerned about eliminating the issue of racial disparity in our society. This is must read and a good read." -- Charles J. Ogletree, Jr., the Jesse Climenko Professor of Law at Harvard Law School and the Executive Director of the Charles Hamilton Houston Institute for Race and Justice. He is the author of a number of books, including The Presumption of Guilt: The Arrest of Henry Louis Gates, Jr. and Race, Class and Crime in America

"Tim Wise is an American hero in the truest sense of the term -- he tells the truth, no matter how inconvenient that truth might be. Dear White America is a desperately needed response to the insidious mythology that pretends whites are oppressed and people of color unduly privileged. In the process, it exposes how new forms of racism have been deliberately embedded into our supposedly 'color blind' culture. Read this book -- but rest assured, it's not for the faint of heart." -- David Sirota, syndicated columnist, radio host, author of Back to Our Future: How the 1980s Explain the World We Live In Now