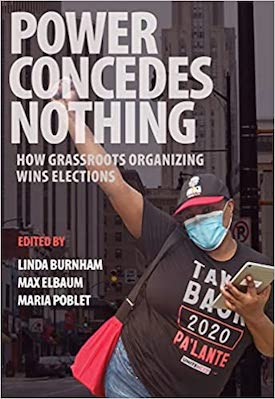 Edited by by Linda Burnham, Max Elbaum, and Maria Poblet

The November 2020 US election was arguably the most consequential since the 1860 election of Abraham Lincoln—and grassroots leaders and organizers played crucial roles in the contention for the presidency and control of both houses of Congress.

Power Concedes Nothing tells the stories behind a victory that won both the White House and the Senate and powered progressive candidates to new levels of influence. It describes the on-the-ground efforts that mobilized a record-breaking turnout by registering new voters and motivating an electorate both old and new. In doing so it charts a viable path to victory for the vital contests upcoming in 2022 and 2024.

“An important, wise, and accessible book and a positive assessment of the role that electoral work can play in social change movements. It’s also a reminder that we need to… use every possible avenue, including voting, to create the world in which we wish to live”
— The Progressive

About the Editors
Linda Burnham is an activist, writer and strategist who served as National Research Director and Senior Advisor at the National Domestic Workers Alliance. She was a leader in the Third World Women’s Alliance and, for 18 years, executive director of the Women of Color Resource Center.

Max Elbaum is a longstanding activist in the peace, anti-racist and radical movements. He is the author of Revolution in the Air and is currently an editor of Convergence (formerly Organizing Upgrade).

María Poblet is a longtime community organizer with roots in Buenos Aires, Guadalajara, and East Los Angeles. She was instrumental in building Causa Justa :: Just Cause and currently serves as the Executive Director of Grassroots Power Project and as a board member of the Bay Area Rising Action Fund.