Under the Affluence, Shaming the Poor, Praising the Rich and Sacrificing the Future of America 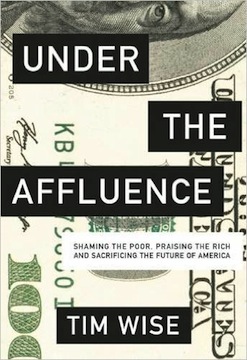 Tim
Wise
Scheduling Info Upcoming Events
Tim
Wise
In Under the Affluence, anti- racism author and speaker Tim Wise discusses a related issue: economic inequality and the demonization of those in need. He reminds us that there was a time when the hardship of fellow Americans stirred feelings of sympathy, solidarity for struggling families, and support for policies and programs meant to alleviate poverty. Today, however, mainstream discourse blames people with low income for their own situation, and the notion of an intractable "culture of poverty" has pushed our country in an especially ugly direction.
Wise argues that far from any culture of poverty, it is the culture of predatory affluence that deserves the blame for America's simmering economic and social crises. He documents the increasing contempt for the nation's poor, and reveals the forces at work to create and perpetuate it. With clarity, passion and eloquence, he demonstrates how America's myth of personal entitlement based on merit is inextricably linked to pernicious racial bigotry, and he points the way to greater compassion, fairness, and economic justice.

"Tim Wise is a truth-teller and long distance freedom-fighter. He is my vanilla brother whose fight against White Supremacy is exemplary and inspiring!"–– Cornel West

"[Wise's] work is revolutionary, and those who react negatively are simply afraid of hearing the truth …"–– Robin D.G. Kelley, Professor of History, University of Southern California, author of Race Rebels, and Yo' Mama's Disfunktional!

Praise for Under the Affluence:

"Tim Wise has produced an eloquent, meticulously researched book that could make economic inequality a central issue in the 2016 presidential election. The book I can best compare it to is Michael Harrington's The Other America which helped inspire 'The War On Poverty.' Written in passionate prose, invoking honored American traditions, it has the power to change minds and melt hearts. I look forward to sharing it with my students, and with anyone else concerned with justice and equity"–– Mark Naison, Professor of African American Studies and History, Fordham University and author of White Boy: A Memoir and Badass Teachers Unite!

"America 'under the affluence' is a cruel and heartless place. By word and by deed, we turn against the poor and feast on a diet of resentment and myths. If anyone can unpack the racist and patriarchal lies that undergird our current culture of cruelty, Tim Wise can. In clear, simple language, product of a lifetime of research, he describes how we got here and how we might build a more compassionate place. We need his voice."–– Laura Flanders, host of GritTV with Laura Flanders

"A single image––watching the Super Bowl under conditions like our distribution of wealth––is worth the price of Under the Affluence. Most of us are dying, crushed because we're stacked 50 in a seat, while the 1% ... But read it for yourself. Wise has spent many hours reading what the Right has written to dehumanize poor people, so you don't have to! He humanizes them back, using real evidence."–– James Loewen, author of Lies My Teacher Told Me and Sundown Towns.